April 16, 2018 - We are expecting puppies! Beezleigh had an ultrasound today and we saw 10 puppies! We are so excited. Please see the litter page for all the details

Beezleigh's official Grand Championship certificate came in the mail yesterday. Time to shave! It's so bitter sweet. We spend so much time and effort caring for her coat then - chop chop! A few tears from my sister but both are very happy with the end results. The only problem now is, we can't tell Mom- Nina from Daughter- Beezleigh. So we added feathers. Next we might add colour!

September 9th, 2017- Epique poodles would like to introduce our very first Grand Champion! GrCh Epique Don't Stop Me Now-  Beezleigh - She was Breeder/ Owner handled and groomed for her whole career and from my first litter.  I am pretty proud of us both. 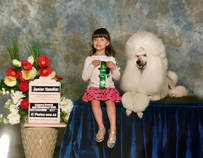 August 9, 2017- What an amazing weekend at the AKC show! We are only 5 points away from a new Grand Champion. Athe the Poodle Club of Alberta Specialty on Sunday Beezleigh took home the Award of Merit. I am so proud of my girl. 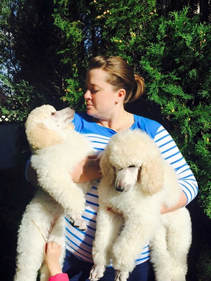 August 1, 2015- An amazing win at Spruce Meadows this weekend against stiff competition.
The Puppies are here! Born on July 14, 2015. They are healthy and thriving.
On Easter weekend Beezleigh attended her second show in Red Deer. She looked amazing and did so well. We got Reserve Winners Bitch and Best Puppy in Breed 2 out of 3 days! 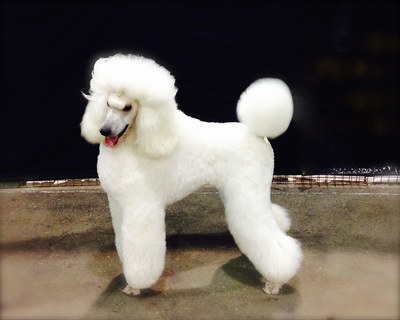 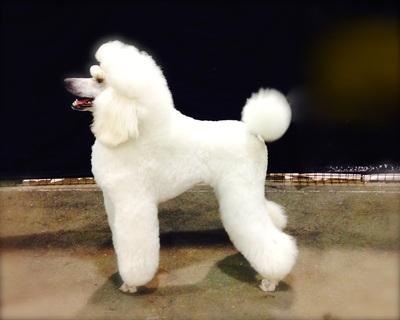 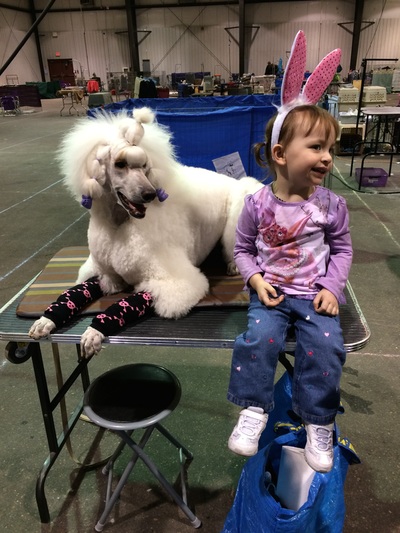 Beezleigh modelled for a fashion magazine. She was featured in a spread called 'Big Hair' in Elegant Magazine. We had a lot of fun working with photographer Stephanie Landry. 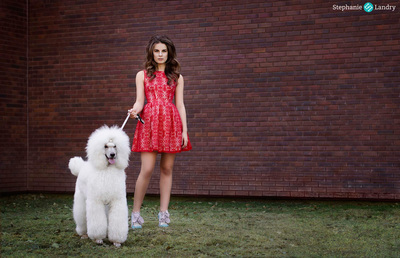 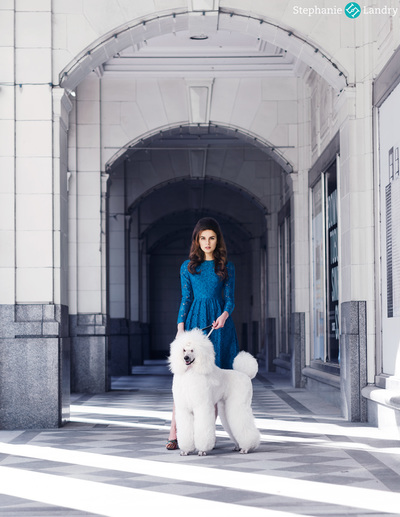 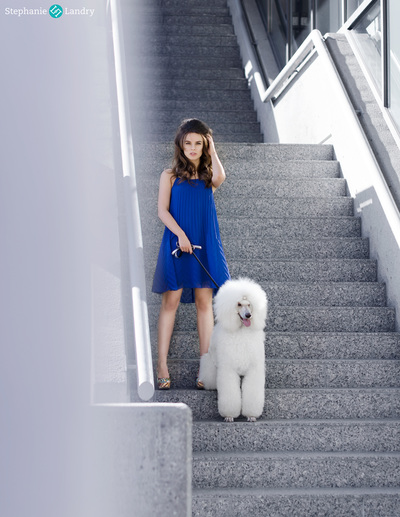 On November 5th Beezleigh and Nina starred in a charity fashion show supporting the Calgary Philharmonic Orchestra. The theme was Lock into Paris and of course they needed french poodles! They both did really well and were the show stopper of the night. 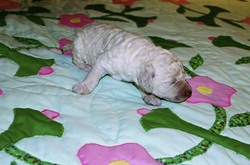 June 5th 2014, we welcomed one large girl to the Epique family. She is doing very well and we are hopeful she will be our next show girl. 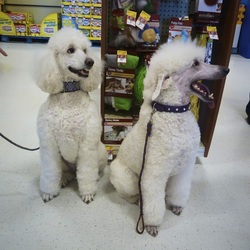 November 8 2013: Exciting news! All Nina's testing has come back and we are all set to have puppies in the spring! 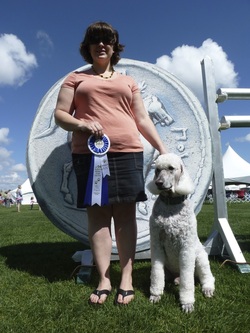 On August 4th at the AKC show Phoenix got his final leg for his rally advanced.I am so proud of my boy! 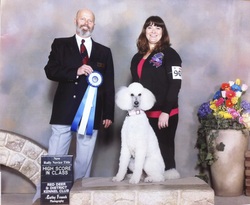 On April 6th Sookie achieved her third leg in Rally Novice with a high in class. She loves to work and you could hear a few people giggle as we went through the course. She sometimes bounces instead of walking. But she makes sure to bounce in heel position. 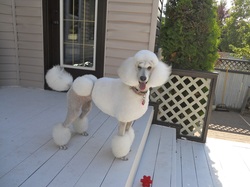 Sookie is retired! I have decided with a new baby that keeping show coat might be unreasonable. So I cut Sookie down to be a normal dog. She can now play just as rough as she wants, swim and get dirty! We will be finishing her rally novice title in the new year. I am looking forward to doing agility, rally, herding and formal obedience with her. She might even try fly ball! She has so much drive and wants to please that she is fantastic at rally and will do great things with what ever we do next. I am currently getting the final tests done on Phoenix and Sookie. I plan on breeding them next summer. Nina will finish her testing this fall and we are planning on breeding her in the new year at her breeders -Larkspur Poodles. 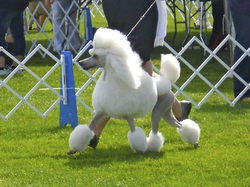 Aug 3-6 we went to our last show with Sookie. She did wonderfully. We only showed 2 days as at 6 months pregnant I found the heat and effort a bit much! She took BOS at the Non Sporting group specialty. She showed beautifully. The show is at spruce meadows which is the most beautiful show. 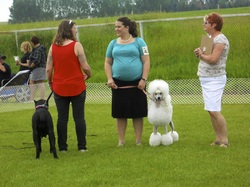 Also at the EKKOC show Sookie passed her CGN. It was a great weekend for Epique!!! 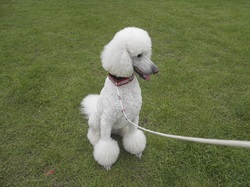 At the EKKOC show Nina finished her Rally Novice title! Mom did it all herself and also got two extra qualifying scores for good measure. Nina is now CH Onnalee Larkspur Tet a Tet CGN RN. 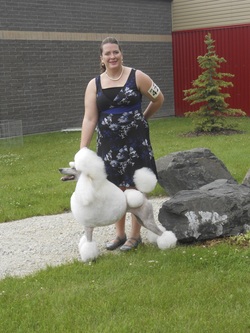 July 13-15 we went to the EKKOC show and specialed Sookie. I am also 5 months pregnant! I wanted to do a few more shows for fun before baby comes. She took BOS. She has a blast showing and really enjoys the grooming and showing parts.
On May 11-15 my Mom and I took all three dogs to Medicine Hat for Rally. Nina and Sookie both got 2 legs on their rally novice title. It was Mom's first time in the  obedience ring and she did awesome! Phoenix got 2 legs on his rally advances title as well as high in class on the Saturday! They all did wonderfully showing their drive a big poodle brains! 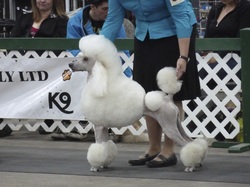 Sookie went to Camrose March 23-25th and was a special for the first time. She took best of opposite sex both days including the Poodle Club of Alberta booster. I am very proud of my girl! 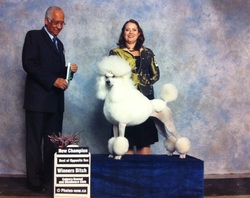 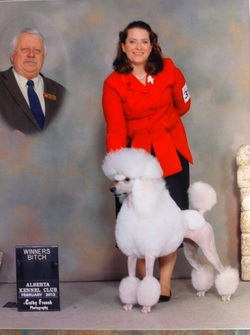 Sookie finished the CKOC show on Feb 3-5 with 8 points. Only 2 more to go! 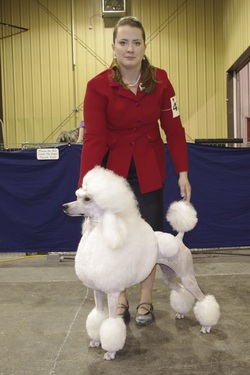 November 4 -6 Red Deer show. Sookie took Winners Bitch for 2 points. She has 5 points now. Half way! She showed so well and looks great in her big girl cut. 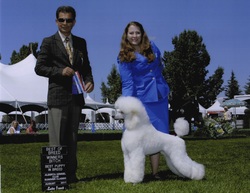 July 29, 30 August 1, 2   We attended the AKC Summer Classic. Sookie took Best of Breed and Best Puppy in Breed for 2 points! After the show I put her into her big girl cut. She will grow coat until October. 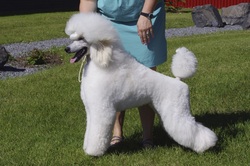 July 15 - 17 we were at the Evelyn Kenny Show in Calgary. Friday Sookie got Best Puppy in Breed over a special!. Saturday we took Best of Winners for our first point. Sookie Showed beautifully. She enjoys the shows so much. 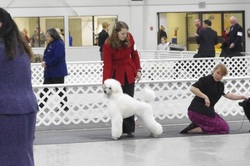 In April We went to Red Deer and Sookie took best puppy in breed and reserve winners bitch. A great win and we are so proud! Phoenix also took his therapy dog test and passed no problem. But the time commitment is to much for me right now and I won't be perusing therapy work with him at this time. 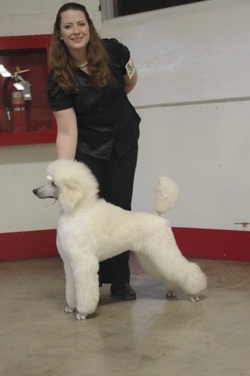 CKOC was Sookie's 2nd show March 11-13. She took reserve winners bitch on Saturday. She gaited beautifully and made sure to kiss the judges when they examined her. She really enjoys the ring and the whole showing experience. We are looking forward to the next show in Red Deer. 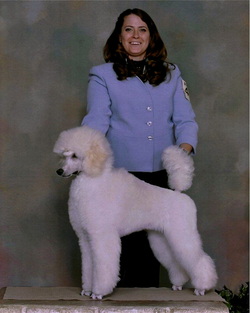 Sookie's first show was February 5th and 6th at the EKKOC. She loved it and was a bit of a goof. But she was reserve winners bitch over senior puppies both days. The judge commented on her great attitude and to keep that spirit. We are very proud of her. The next show is March 11, 12, & 13 in Calgary.
***All photos are the Property of Epique Standard Poodles & Victoria Tomblin and are not to be copied without written permission from myself.  This applies for any written material as well.  Please write to me if you wish to link to something on my Website. I hope you enjoy my website***
Powered by